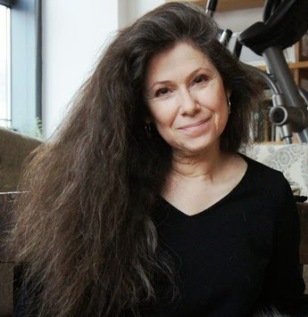 Susan Lewis lives in New York City and edits Posit. She is the author of How to be Another (Červená Barva Press, 2014), State of the Union (Spuyten Duyvil Press, 2014), The Following Message (White Knuckle Press, 2013), At Times Your Lines (Argotist Ebooks, 2012), Some Assembly Required (Dancing Girl Press, 2011), Commodity Fetishism, winner of the 2009 Červená Barva Press Chapbook Award, and Animal Husbandry (Finishing Line Press, 2008).
Gay Degani: I’ve read many of your poems – especially your prose poems – but before we get started with discussing that subject, I thought my first question should be more about you, for me and the readers to get to know you. Can you tell me a little more about what brought you to writing? I noticed from your extended biography that you went to law school. Being a lawyer means lots and lots of writing, did that play any part in your decision to turn to writing?
Susan Lewis: It’s true that law involves plenty of writing – and reading. That was probably why I thought I might be better suited to the field than I was! I’d been a bookworm since I was tiny: a bit sickly, I was always reading. I was also taken all over the world (school be damned!) by my parents, who were globe-trotting Hollywood producers – and spent a lot of time in planes, trains, cars, and hotel rooms – reading.
By the time I was a teenager I had powered through the canon. As for writing, when I was six or seven, I fell in love with a slim volume of poems by Basho, and started writing Haiku, Tanka, etc. I kept writing poetry, plays, and short stories until I went to college, where I studied – and therefore wrote – literature and film criticism. After which I wanted to be “relevant” and “engaged” in social justice – hence my foray into law. The fact is law taught me plenty about discipline and accuracy. But it was not a great fit. I’m no warrior – I’ve always loathed competition. And intellectually, I’m more intuitive than methodical, preferring insight to argumentation, implication to explication.
GD: What launched you from law to writing, the actual step between pragmatic practice to creative work? How did that evolve for you?
SL: Ah, well, like almost everything I’ve ever decided to “start,” I had no idea what I was getting into when I “tried” writing! After getting my BA in only three years, going straight through law school, and finishing a very demanding stint as a law clerk to a US District Court judge, I decided to nourish my soul by “taking a year off” to write.

Well, that year turned into a few, during which I discovered, to my chagrin, that I had no desire to go back into law. For a while I wrote screenplays, but discovered that world wasn’t right for me either. So I decided to pursue an MFA in fiction, which is all I wrote for many years. Then I morphed (yet again!) into a poet, albeit one with a foot still in the narrative door. But the fact is I’ve never lost my pragmatic side: so alongside the writing, I taught for a few years, and then served as a fiction editor, poetry editor, guest editor, managing editor, and finally, founding editor of the journal I run now (Posit).
GD: Let’s talk about your work!! One of the reasons I wanted to have an opportunity to interview you is because you do have one foot wholly into poetry and the other foot straddling the rather unclear line between poetry and fiction, what some people would call “prose poetry.” I began thinking about this “unclear line” between the two when I read one of my stories at an event and received several compliments on my poem! It was narrative flash, but because it was read aloud, I suppose it was harder to tell.
When I met you earlier this year, you introduced yourself first as a poet, then laughed and said something about how your poems sometimes merge with fiction (not your exact words, my apologies). I wanted to know more. What about prose poems? Are there distinct features to each side of the line, prose v. poem? Does it matter what we call them?
SL: Gay, I love these questions. In fact, the prose poem is a form with a venerable history (dating back to Beaudelaire, Rimbaud, and Mallarmé), and so yes, I believe it is a term with meaning, and not a shallow or arbitrary label, which is not to say that many prose pieces might not reasonably reside in more than one category.
First and foremost, it comes down to the author’s intention/understanding – in which tradition she would like her work to be situated. But it’s also a question of the publisher’s understanding. For instance, although I tend to consider most of my short prose pieces poems, I have had a number of them published “across the aisle,” as flash fiction! And that’s fine with me – I’m not rigid about the label. But I do think there are ramifications.
For instance, in the readership. As we both know, fiction and poetry readers are pretty distinct populations, with very little overlap. (As are, to a significant extent, their publishers). Naturally, they’ll view the work from quite different frames of reference. This also speaks to how the author wants her work approached – which of its features she’s hoping readers will engage.
For myself, I’ve written most, but not all, of my short prose pieces in the belief that I was writing poetry – without necessarily knowing, during the composition process, whether they would end up lineated or in blocks. I also considered them poetry partly because I was inspired by, and responding to, the work ofwriters generally considered “poets.” In addition, I envisioned poetry readers as their “target audience.” On the other hand, for years I wrote short stories, even very short “flash” pieces, which were informed by a consciousness of, and admiration for, an entirely different literary corpus. (As were my intended readers).
As for what makes fiction “fiction,” and what makes poetry “poetry” – any generalization can be shattered by the right counterexample. Nonetheless, casting a piece as a work of fiction invites comparison to literature that tends to emphasize character, description, dramatic arc, etc. Poetry, on the other hand, is presumed (or permitted) to be more about form or language itself, with a more primary focus on rhythm, texture, music, argument, etc. But we don’t have to look at prose poetry to see the lines blur; consider, on the one hand, Beckett’s fiction (or even Joyce’s); and narrative poetry on the other (Dante, Milton, Browning, Tennyson, etc.)

GD: I love learning about this. To introduce readers to your work, I selected one I particularly like that was published in the Brooklyn Rail earlier this year. What draws me to this work is the wordplay throughout, the way so many words and phrases echo each other. For example,
From: “Say What You Want”

“Chamber,” “clamor,” and “comrades clambering” as well as “grasped” and “gasped” and “light” “like.” Is this what’s called an internal rhyming scheme? I’ve read poems here and there over the years, but haven’t studied them since college so the terminology is not part of my personal lexicon.

Can you talk a little bit about the four pieces published under the heading from State of the Union.

Readers of this interview can find them here: Brooklyn Rail/Susan Lewis

SL: I’m glad you like those pieces! I’m not sure I’d use the word “scheme,” but what you are identifying are indeed internal rhymes (as well as other poetic devices, such as alliteration and assonance). Since these are prose poems, as opposed to lineated verse, there are no line or stanzaic, breaks – so in a sense, every prosodic device is “internal.”

Those pieces are from my most recent chapbook, State of the Union, a group of twenty-five prose poems struggling, more and less playfully, as well as more and less abstractly, with the question of union – on the personal as well as social scale. I’m interested in the energy and provocation generated by wrestling to unite, or at least encompass, oppositions.
It strikes me as a quixotic struggle parallel to our struggle as humans, which I think is both imperative and impossible, to “only connect,” as Forster so succinctly admonished. Just consider the irony of that word, “only!” In a sense I’m just reaching for the artistry of Forster’s epigraph – using compression to encompass sincerity and irony, darkness and light, bleakness and humor.
That little book has been fortunate to receive several generous reviews, but one that particularly moved me was by Moira Richards in a June issue of the Cape Times, treating my poems as relevant to the struggle for unity and dialogue in South Africa!
GD: You really know your stuff. What advice would you give a writer who finds herself (or himself) trying to decide which way to write a piece, as poetry or prose? In other words, if they feel they need to decide because they’re buried in a muddle of words they like, what criteria would you have them use?
SL: First, I’d think about which kind of reader I was wishing for. Then, I’d try writing it one way and if it flowed, I’d take that as a good sign. If the process stalled, or seemed to be stultified by the task of fitting into that particular form, I’d try changing it up, and see what happens. I believe in letting go and listening – in letting the piece you’re writing tell you what it wants to be – which can sometimes be surprisingly far from our original intentions.
GD: And my last question, could you please name your inspirations in life and in writing?
SL: Wow! The first thing I need to do is add the words “some of” before “your!” Writers who have inspired me include, but are definitely not limited to: Franz Kafka, Samuel Beckett, Gertrude Stein, James Joyce, Jorge Luis Borges, Octavio Paz, Julio Cortazar, Russell Edson, Michael Palmer, Bin Ramke, John Ashbery, Jose Saramago, Jim Crace, Yasunari Kawabata, Nadine Gordimer, J. M. Coetzee…not to mention the extraordinary writers I continue to discover almost every day.
In line with my fondness for duality, I’m inspired by two radically dissimilar groups of people in my life. There are those with the spirit to endure and even thrive, despite the often harsh challenges life throws at them. Others decline the refuge of optimistic delusion, and brave the pain caused by facing reality head-on. Their common denominator is courage, which inspires me in every shape and size.
***
New from Susan Lewis:

This Visit
BlazeVOX [books]
Paperback: 104 pages
ISBN: 978-60964-169-6
$16
cover art by Michael Janis
Available for preorder now (publication date 2/1/15) on Publisher’s page.
An elegy to this visit of the living to our own existence, This Visit is a pastiche of lyrical dissonances assembled from intimate voices yearning for connection. The world of these poems is constantly struggling to take form, like Michelangelo’s slaves emerging from the half-hewn stone, or Duchamp’s nude descending a multitude of linguistic staircases by way of half-lines, half-steps, snatches of overheard lines, and the primordial rhythms and rhymes ingrained in our bones.