It seems to me I have always written fiction. Miss Harrison – my Year 4 teacher – said I was a good writer (I was nine) and set me up on a project to write a long story (over ten pages, she said, but I think I did thirty). She had another pupil do the illustrations, another one to bind it and so on. It was a Dr. Who story (the Doctor was new then), and she said my story was so good, she was going to get it published. And then she vanished: after Easter, she didn’t come back and my manuscript disappeared. It scarred me for life, and set me out on the quest to be a published writer.
At secondary school I won a school prize for a story I wrote at sixteen, then at Uni I was encouraged to write more fiction (although there were no creative writing courses then; this was a teacher training course). When I left, I decided to write seriously and bought several hardback A4 page-a-day diaries (I still use these, still write longhand).
From the very start, I was writing what are now called “flash fictions” – pieces under 1000 words that were complete. Actually some did provide the germ of longer stories, but most stubbornly refused to, and insisted they were finished. In those days – the early 80s – no one was accepting stories of this length. I’d seen some examples (Walser springs to mind), and it was great when the Sudden Fiction anthologies came out, and I realised that flashes were acceptable. Still no dice here (UK) with most (all!) publishers, magazines, not accepting the shorter pieces, although I was getting my longer fiction out. “Taking Doreen out of the Sky,” for instance, which became the title story of my first collection published by Picador in 1999, was published in London Magazine in 1985 and won the Tom-Gallon award in 1987. 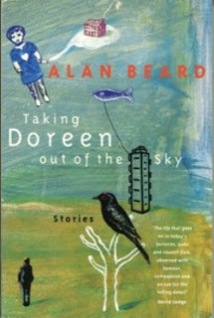 The first breakthrough with flash came when Bete Noir accepted a 750-word piece called “A Man” in the early 90s. That was it until the internet took off and flash sites started to appear here and there; I had pieces accepted by In Posse Review (2004), Vestal Review (2005 and 06), and taint magazine (2005). All had been written in 1983, although I did tighten and polish. That was the pattern then. As more sites became available, I started getting my (usually already written) flashes published at the pace of about two or three a year, so that now I have about thirty flashes published in places like Wordia, Flashshot, Wufniks, and latterly Litro, Oblong, Spelk, and some print only places such as Flash Fiction: The International Short –Short Story Magazine, Falling Star, and BuffaloCarp.
I enjoy reading novels but apart from a short spell in my mid-20s when I wrote over a 100 pages (abandoned as crap), I have never wanted to write one. Stories have always been my thing. This might stem from the anthology we read at school in 1969  – Twentieth Century Short Stories – a selection of great English stories (if you count Conrad and Mansfield as English as they settled here): Conrad’s Secret Sharer, Lawrence’s Odour of Chrysanthemums, E M Forster’s The Machine Stops, Mansfield’s Daughters of the Late Colonel, Greene’s The Destructors.
The book made me love short stories above all else, and to seek out the best forever, and try and emulate, as far as I was able, the compact beauty of the form that these masters displayed. I bought, borrowed, or stole story collections and anthologies, loved the Best Short Stories annuals, and was so pleased to have one selected for it many years later in 1991, and then after the anthologies disappeared, to have another in the first reincarnation of it Best British Short Stories 2011. My idols were – and are – Carver, Ford, Jayne Anne Phillips, Alice Munro – all of whom had collections out as I was leaving college. 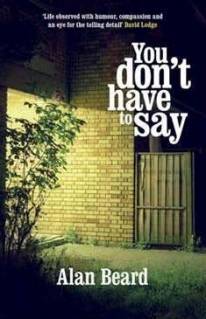 I moved to Birmingham (UK) in 1982 and joined a writers’ group soon after (Tindal Street Fiction Group). Birmingham gave me my subject, the landscape of the city and its people, and the group kept me writing (although I was and still am an extremely slow writer – I produce on average one finished piece a year).

Lately I am using twitter ( @AlanBeard4 ) as a writer’s notebook with observations, things overheard etc., but also some complete “stories” (as I see it), e.g.
Up Snowdon we tramped to no avail. Thick fog descended and we could barely see each other. We came down on the railway.
(Snowdon is the highest mountain in Wales)
Or
Arranges his flat as though he expects visitors; best place for the furniture to facilitate conversation, or her. Deciding who he would be.
I like the discipline of 140 characters and it suits the way I write. However, I am always startled when someone responds, recently I tweeted:

Left on his own he crumbles and curls, dying slowly, visited by nightmare; his pouch of a belly and goblin legs terrify him.

And somebody tweeted back ‘I guess Boris.’
All Light
by Alan Beard

The boy on the beach has his eyes closed and the chatter eddies at his ears. He thinks he’s her boy-trap. He makes her sticky. The beach is rolling, the beach is swollen. Sea’s froth breaks on bodies like music. I am a gull’s cry. I am grass in the dunes. He’s the sharpness, he’s the light. Radio voices, he’s a transmitter. She is a voice from a long way off and the colours brim through his opening lids, like all light trying to get in.

Alan Beard has published two short story collections Taking Doreen out of the Sky (Picador 1999, also on Kindle) and You Don’t Have to Say (Tindal Street Press, 2010). He won the Tom-Gallon award. Stories in Best Short Stories 1991, and Best British Short Stories 2011 and many places including Critical Quarterly, Malahat Review, London Magazine, and on BBC Radio 4.
Links: My website includes links to stories, news, reviews etc.
Two stories of mine on East of the Web
A recent flash
Reviews: Taking Doreen Out of the Sky and You Don’t Have to Say
Amazon author page