No one element can make a story work. Many writers use a series of steps—brainstorming, outlining, drafting, revision, editing, and proofreading—to juggle content, structure, and language. The order of each step is a matter of choice and fluctuates with story ideas.

Content refers to the subject matter of a story. 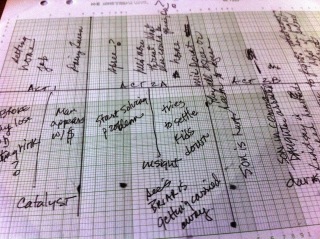 Structure refers to the basic organization of a story.

Language refers the diction and style used to express a story’s idea.

Process is what brings these three basic components of composition together.

Writing is a Process. Yeah, it is!

Actually, the steps to the writing process bleed into each other like ink dropped from a leaky pen over one spot. The blotches don’t land in exactly the same place, but they seep beyond each other’s borders, and create a new kind of art.