Excerpt from “Mimo” by Lynne Bronstein

Back in the ‘70s, if you were walking in Venice at night, you might have seen her standing in a doorway, singing softly to herself. You would have had to look straight ahead or even down because she was tiny, not more than five foot one and she herself joked that her bones were like noodles. You would have known her by her hair. It was always some color not found in nature, blue-green or vivid red or purple with silver streaks. She didn’t have it done in a salon, she never could have afforded that,so she got the dyes from somewhere and did it herself in public restrooms or friends’ homes. She spiked it and put some sort of grease on it and it stuck up from her head like alien plant life.

She came wrapped in old kimonos, worn camouflage jackets, denim vests and jeans, velvet robes, falling-apart lace gowns. Her nose was a bit beaky and there was a scraped area on one side of her face. She’d survived a motorcycle crash years before.
She called herself Mimo. People thought she was mispronouncing Memo. She pronounced it with a short “i.” Was her name Mimosa? Miriam?
Few people knew her real name. Welfare knew what it was. Mimo used friends’ addresses and at one time or another had a post office box. She lived nowhere and everywhere. She slept on peoples’ couches, in shelters, or on the street. Sometimes people told her she ought to get a permanent place to live and she shook her head and said “I don’t want to live anywhere.”
Why, Mimo? they would ask her. And she always answered:
“I’m free this way.”

What is the weirdest thing that ever happened to you in Los Angeles?

I’ve lived here a long time so there could be many incidents that I could cite. Maybe it was the time when I just accidentally ran into Jim Morrison on Santa Monica Boulevard (it wasnear the studio where The Doors were recording LA Woman at the time). He told me he was busy and I should meet him at the same place the following week. He never showed up.

Do you have a yet-to-be realized L.A. dream?

I always wanted a house that I own. The cost of a house now is too much. I used to design the house I wanted to live in, even drawing floor plans. I might instead build a doll house using found objects.

Why write short stories? Why write at all? What’s in it for you?

I’ve always written things. I can’t stop myself-it’s compulsive. I “wrote” my first poem before I could even write-my father had to write down what I dictated. I like to tell stories. A short story is easier than a full-length novel but it’s also a challenge in another way-you have to hit the beginning, middle, and end quickly and develop your characters quickly in fewer words.

What is the biggest challenge in writing to theme?

I often interpret a theme according to my imagination and my ideas, which may not be what an editor has in mind. When I submitted my story “Mimo” to LAst Resort, I was afraid it would not be accepted because it was not a whodunit or procedural but that was more a matter of story type than of theme. It turned out that I had fulfilled the requirements by creating a character that came from somewhere else and encountered bad luck in LA.

Are the characters in your story based on you or people you know/met?
As I describe below, “Mimo” is based on a real murder case and the character Mimo is based on a real woman-but I did not know her so I created her from bits and pieces of the behavior of real homeless people that I have observed. I also put some of myself in her. But then again, my character Roger the journalist, is also me to some extent. Most of my characters tend to contain parts of me. We know ourselves best (or we think we do).

Los Angeles is a patchwork quilt of different neighborhoods. Why did you pick the  area you used for your story, and how did the neighborhood influence your writing?

Venice was the neighborhood in which the real-life incident that I based my story on took place. But I also know Venice like the back of my hand. For many years I lived nearby in the Ocean Park section of Santa Monica. I worked in Venice, volunteered for a local newspaper published in Venice, and hung out with friends in Venice. I found myself referencing real Venice places in my story, such as the Lafayette Café where I used to breakfast on weekends. I wanted to capture the ambience of Venice as I knew it in the 1970s before the onslaught of development and faux-hipness that has taken it over now. It was a place where everyone was valued, even homeless people. I’d like to think that nothing can completely kill that spirit.

Are there scenes in your story based on real life—yours, hearsay, or a news story you read?

The real-life incident took place in 1977. The model for Mimo was Benita Bingham, known in Venice as “Bingo,” who was murdered by her ex-husband after he was released from prison. I never knew Bingo; I merely heard stories about her from people who did know her. My theory is that she resisted living in an apartment because it would be more difficult for her ex to find her if she were homeless. That’s the basis for what happens in my story.

What came first, the character or the plot?

They came simultaneously, due to the real-life incidents that inspired them. But I had to work on the development of Mimo as a believable character. I thought about how she would look and dress and talk. I wanted another character for her to interact with, a character that would also “ground” the story in reality for the reader and for that purpose I created Roger the journalist. I originally wrote the story in the third person but I switched to first person and it made an incredible difference in tone and credibility. 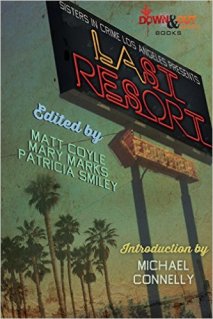 While you’re writing: music (what kind?), dead silence, or….

I prefer to write without music, with as much silence as possible. Music, especially if it has a vocal, distracts me and the lyrics get in the way. Instrumental music is sometimes okay to write poetry to.

Favorite writing quote—yours or from someone else…

I can’t think off hand of a quote. I can paraphrase something from Harlan Ellison’s Dangerous Visions anthology: he said that above all, what writers give is their courage. Add to that Anais Nin’s advice to writers that they write every day and you have my guidelines for the life of a writer.

Your writing ritual begins with…

I wish I could begin the day with writing before anything else but even my journal has to wait a bit. When I wake up each day, the first thing I have to do is feed the four cats. Then comes breakfast, showering, dressing, writing my journal, yoga, chores around the house. When I do get down to writing, I like it to be quiet, comfortable temperature-wise, and I usually have to have access to liquid refreshment. I often have to get up and pace around. If I am “on a roll” I just sit tight and type away. When I begin to write, I just begin to write. It has always begun that way.

Lynne Bronstein is the author of four poetry collections, Astray from Normalcy, Roughage, Thirsty in the Ocean, and Border Crossings.Her poetry and short fiction have been published in magazines, newspapers, anthologies, and on web sites. She has been a journalist for five decades, writing for the Los Angeles Times and other Los Angeles area newspapers. She also writes a blog, “No Rainy Days.” Recently she adapted Shakespeare’s As You Like It as a contemporary Valley-speak spoof which was performed at the Studio City and Hollywood public libraries. She has been nominated for two Pushcart Prizes for poetry and for two Best of the Net Awards for short fiction. She won a prize for her short story “Why Me” and two prizes from Channel 37 public access for news writing. She has taught poetry and journalism workshops for children at 826LA and for the Arcadia Library and was cited by the city and county of Los Angeles for her mentoring work with Jewish Vocational Service. Her latest publication is a short story in the crime fiction anthology LAst Resort from Sisters in Crime. A native New Yorker and LA transplant, she lives in the San Fernando Valley and has four cats.