by Chelsea Voulgares
Imagine a nineteen-year-old woman at a music conservatory twenty minutes from Cleveland. In high school, she wanted to grow up to be a high school choir director. This girl sings, dates a saxophone player, and pulls her kinky hair back into a ponytail most days to straighten it. Her dad works as a fireman and her mom as an office assistant in a rubber factory. She has a problem: she can’t play the piano and her sight-reading is lousy, so for the first time in her life she’s getting Cs. The education classes make her miserable too. She imagines (and dreads) a future where she’s a mediocre choir teacher who pretends to believe in God and acts as if she enjoys parent-teacher conferences. She panics.
Her parents divorce, the saxophonist dumps her, and as she tries to figure out what the hell to do with her quickly dissolving dreams, she picks up The Bell Jar by Sylvia Plath. Plath is also young and dumb and full of glumness. The young woman chases Plath with Wuthering Heights, like a morbid gin and tonic, and these two books about young women in crisis, trying to make their way in the world, offer her a lifeline. She drops out of the music school and enrolls as an English major. 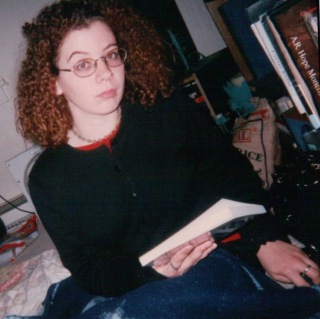 This young woman was me, of course. I’m not one of those writers who composed a novel when I was ten. I wanted to be a writer as a kid, sure. I also wanted to be an astronaut, a ballerina, a marine biologist. Kids want to be and do everything. The act of reading has always been important to me, though, and in that moment early in college, as my life seemed to be falling apart (in a very mundane way—let’s not be dramatic), I connected to literature in a way that clearly meant stories were an essential part of who I was and have become.

A year later I started writing poetry, in love with poets such as W.B. Yeats, Plath (again), and Sharon Olds. The poetry stunk. But in the way of early twenty-somethings, I thought it was amazing. I was an artist! I would be a star!
Luckily, because fame and fortune would not be an immediate outcome of my fledgling attempts at poetry, I also felt a deep connection with the teachers who guided me. I wanted to be like them; I decided to get a master’s degree in English literature. In my Master’s program, I read more books that would change me. These, too, would become an integral part of how I viewed the world: Zora Neale Hurston’s Their Eyes Were Watching God, James Baldwin’s Tell Me How Long the Train’s Been Gone, Audre Lorde’s Zami, as well as the poems of Adrienne Rich and Charles Bukowski.

Baldwin said, “You think your pain and your heartbreak are unprecedented in the history of the world, but then you read. It was books that taught me that the things that tormented me most were the very things that connected me with all the people who were alive, who had ever been alive.” As a black man who lived through the civil rights movement Baldwin faced a specific pain I will never know as a white woman. But I do think Baldwin’s quote is universal; as writers we all experience death, disappointment, heartbreak, and joy. We read to see those experiences acted out, to identify and empathize with them, and then, if we are lucky we synthesize them, and we create our own art.
I ultimately decided not to pursue a Ph.D., and faced with what was already a substantial pile of student loans, I entered the work force. I moved to Chicago a month before 9/11, having followed a grad school boyfriend to the city. Unable to find a job, I spent most of the time drinking heavily and playing the Sims. Perhaps unsurprisingly, that relationship ended. I started temping to pay rent, and was hired by the company I still work for.
Finally, in the attic apartment I shared with a bike messenger/bassist friend, I began to write fiction. At first my stories were self-obsessed. Every character was a stand-in for me. Each plot involved some personal problem: a lost friend, an ex, a personal failure. But I took workshops, and I kept reading, and over the years I developed a sense of how to craft a story. I examined all the Plath and Hurston and Bukowski, and I formed it into my voice. Instead of merely being a reflection of myself, my stories started to become part of a conversation. I’m still learning, of course. I’m still reading.

To become a writer is to enter a community, to add your thoughts, ideas, and voice to an ever-growing discussion of what it means to be human. I’m in my forties now and wear my hair wild whenever I can. I live in my own bungalow just west of Chicago with my partner of ten years and four pet catfish. I’ve published a few stories and hope to publish more.
Right now, a book sits face down on my desk, and in front of me, a laptop with a mint green cover. Each day, I work here in my office to insure my words are part of this great conversation. I can only hope as I progress in my art, that I honor the young woman who all those years ago opened up The Bell Jar and found understanding and purpose.
Midnight Walk, 1993
We are in a football town in Ohio, where the boys hug toy pigskins in their hospital cribs, the girls are all cheerleaders, and the hard slap of hand against leather matches the chill touch in the fall air. Around the curve of this road is a driveway, marked by a keep out sign, covered with pentagrams, inverted crosses. We coast up to it in Donnie’s beater. Turn off the headlights. The street turns darker than any I’ve ever seen.
We should go home, I say. Donnie shakes his head. We’ve already dared each other, this time and before, and he’s eager; rumor has it that the dirt drive we face leads to an abandoned house, all crumbling rafters, black mold, and sacrifice. We can’t leave the car here in the road, I say, so he turns the engine back on, and parks right next to the sign…
Excerpt from the flash piece “Midnight Walk, 1993” – Full text appears in Midwestern Gothic, Issue 22 (Summer 2016)
_____________________________________

Chelsea Voulgares lives in the Chicago suburbs and is the editor of the literary journal Lost Balloon. Her work has been published or is forthcoming in Passages North, Cheap Pop, Midwestern Gothic, Literary Orphans, The Millions, Punchnel’s, and Bust, and has been awarded grants from the Illinois Arts Council and the Chicago Department of Cultural Affairs. You can find her online at chelseavoulgares.com or on Twitter @chelsvoulgares.