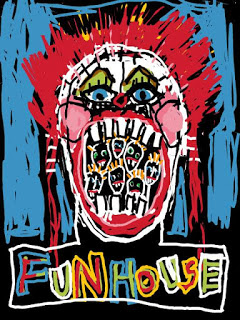 I will never forget the first time I was called FAGGOT.
I used it in the premise for the poem called “What Some Boys Do” (included in my book, Addicts & Basements). You see I was too young to know what that word meant. What I did know: men liked me. I’d been raped the previous year by a complete stranger. He had a deck of cards, and beer, and lured me into his tent. What I remember: his hunting knife at my throat, face suffocating as it was pushed into the tent floor. The sound of rushing water in the adjacent creek. And pain. Searing pain like I had never ever felt before.
So, when those boys on our bus called me FAGGOT…
I was pretty sure I didn’t like men. Certainly not my father.  And his friends were equally gross. Revulsion. My escape was on my horse, or bicycle, and mostly books. In eighth grade, I started a journal to document (in drawn codes) how often I either drank, got high, or both. It’s a practice I have never stopped, journaling, although what use the journal has for me continues to grow exponentially.
As a college freshman, my teacher, Karen, sat on her desk, talked about writers like Gertrude Stein and Jack Kerouac. Symbolism or writing as investigative journalism. Liked my enthusiasm for our group projects. Suggested I take a creative writing class. I was too busy—I was lead singer in my second band, Traiil, and we were booked for paid gigs on most weekend nights. It took that year for me to realize that my music career, gigs, bands, and mostly groupies, were not for me. It also happened to be the same year that my first gay mentor, Harvey Milk, was shot and killed while serving as city supervisor of San Francisco. The message was clear: nowhere is safe, if you are gay. Not even in America.

Two years later, I transferred to Brockport State University. I took mostly theater and dance courses (with Garth Brooks). Eventually, an invitation to join the Writers Forum came from director, Peter Marchant. This was intimidating, simulating, and I allowed myself to dream about a writing life for the first time. My poetry was pedantic, my prose as stiff as my Izod shirt collars, and yet when I heard Grace Paley read (and went to her interview), I vowed I would never give up. Her books, Enormous Changes at theLast Minute and The Little Disturbances of Man inspired me. Also Raymond Carver, Lorrie Moore, Jayne Anne Phillips, Donald Barthelme, Janet Frame. We read so many new authors (to me) that year and the next. Short stories! Short fiction! I was hooked.
During my 20s, I was a flip-flopper. Men, women, men, women. And sure, there is bisexuality, and the Kinsey scale defines us all sexually somewhere between 1 and 10. My problem: I was a 5. Always in the middle, always searching for myself through others. Trying to lose myself through love. Then my best childhood friend, James, was murdered in Bangkok. That upheaval was devastating. James was a writer and our love of books and writing was instrumental. I took an extended period off from work, and had an undiagnosed (at the time) breakdown. Fortunately, with guidance from dear friends, I ended up on Maui’s Makena Beach. Clothing optional. Bare and pared down to essentials, I chose to live. And nature brought me, quite literally, back to life. 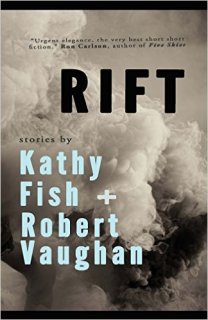 Fast-forward through three long-term relationships, buying houses, setting up joint accounts, couples therapy. It’s been a long road, but here I still am, slogging away. I was a buddy in the mid-80s when you were trained at a hospital to attend to your HIV positive “client’s needs.” All three of my clients died within one year. When I moved to Los Angeles to get away from the carnage, too many people dying in NYC, it just continued on the west coast. Somehow in 1987, my first play was produced in San Francisco’s One Act Festival. It gave me hope, and buoyed me- yes, I am a writer! That same year, I had a short fiction piece published in The L.A. Weekly (“Night Life,” included in my fourth book, RIFT). These were early signs that bolstered my confidence.
Chaotically, I grew into that faggot. There are numerable other stories, other avenues I have explored. But those are transmuted for fiction, poetry, and memoir. I am slowing, now, to a gentler pace. I’ve been with my boyfriend since 2003. Living in the same house in the Midwest (really? This coastal guy?); the longest I have ever lived in any one place, even as a child. One of the greatest gifts my partner gave to me was this full time writing life. So many books surround me, including five of my own. These are all nods to him, of course. I teach part-time, an editor on my fourth journal (b)OINK). I co-hosted a radio show called “Flash Fiction Fridays” on the local NPR affiliate. I’ve published fiction and poetry in over 500 literary journals. Four of my plays have been produced.

And I am still that faggot. In fact, I’m every faggot now. And why do I write? For anyone who doesn’t have a voice: my elementary school janitor, my high school nurse, my hen-pecked mother, cousin John who died on the street. And for all of my friends who no longer exist in human form: James, Terry, Ron, Sally, Mel (Snow Dove!), Frank, Dan. I continue to share your stories, our stories.
And I’m so fortunate, and grateful to be alive.
Truly.
The irony is never ever lost on me.
What Some Boys Do 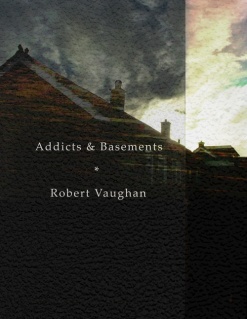 I sat on the bus
same seat as yesterday
heat of  a mid- June afternoon.
Earlier my teacher,
Mrs Starr, asked:
Why is the sky?
How is the ocean?
“What’s in the bag?”
Joe Ferris presses.
His breath smells of
tuna fish. I squeeze the
soft bag tighter
between my legs.
Craig Neff peers
over their seat.
“Answer him, faggot.”
This is what some boys do.
I’m tight-lipped, breath held,
face flung.
I am flying through the sky now,
skimming over the ocean.
The brakes squeak as
the bus pulls over.
Mrs. Nolan, bus driver,
bellows “Turn around, Neff!”
My mother never warned
about the scarf I was
knitting for Grandma Meyer.
It was pink, her favorite color.
My mother never explained
this is something you do
at home. She never said
this is what only some boys do.
What she did say is
when your grandma sees
this scarf, you will make
her very proud. 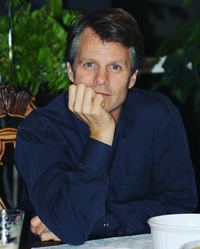 Robert Vaughan teaches workshops in hybrid writing, poetry, fiction, and hike/ write. He has facilitated these at locations like Alverno College, UWM, Red Oak Writing, The Clearing, Synergia Ranch and Mabel Dodge Luhan House. He leads writing roundtables in Milwaukee, WI. He was a finalist for the Gertrude Stein Award for Fiction twice (2013, 2014). He was the head judge for the Bath International Flash Fiction Awards, 2016. His short fiction, ‘A Box’ was selected for Best Small Fictions 2016 (Queen’s Ferry Press).
Vaughan is the author of five books: Microtones (Cervena Barva Press); Diptychs + Triptychs + Lipsticks + Dipshits (Deadly Chaps); Addicts & Basements(CCM) and RIFT, a flash collection co-authored with Kathy Fish (Unknown Press). His new book, FUNHOUSE (Unknown Press) is scheduled for release in December, 2016. He blogs at www.robert-vaughan.com.

6 thoughts on “JOURNEY TO PLANET WRITE: The Sound of Rushing Waters”