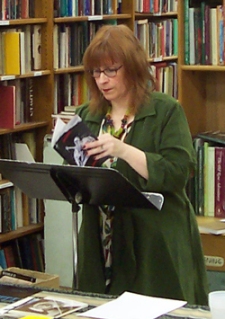 At age nine. I was writing music and lyrics. I loved to sing and was constantly writing small songs. When I was twelve, I performed in a school play and was hooked on theatre and acting and continued until age forty, when I retired from the stage.

While growing up, there were so many books in the house. My mother painted and art books were a big part of my life. She recited the poetry of Robert Burns and Robert Frost which drove me crazy. Only years later did I appreciate their poetry. My dad was a school teacher so between them, I learned to appreciate the arts. My sister Kellis plays the piano, my brother-in-law plays the clarinet and other instruments and my nephew plays the violin. I have a very inspiring and artistic family.

In high school, I discovered Keats and Shelley and feel this was a turning point in my life. In college, I would go to the library and read poetry for hours. One of my favorite poems during that time was “The Buried Life” by Matthew Arnold.

Fast forward to the early 1980’s. For years, I had been performing, acting, and singing in cafes, bars, and at a few universities my original music and lyrics. I also sang the music of other musicians whose songs were so poetic, Joni Mitchell being one of them. I loved singing so much! In 1982, I lived in Iowa City for two years. I met so many wonderful writers at the Iowa Writers Workshop. At this time, I was writing experimental plays and performing performance art.

Iowa City is where I co-founded a theatre with my ex-husband. When making the move to Somerville in 1984, our theatre got a name. Theatre S & S. Press. We became a non-profit theatre and a magazine was founded which I edited called the Boston Literary Review/BluR. The theatre and magazine ceased in 1994.

Around this time, I discovered Eastern European poetry, literature, and translations. I started writing poetry and was influenced by this writing. I felt like I was home. Still today, that is the writing that makes me tick, want to write, and makes me feel alive when I read it. I can’t get enough of it. All my singing, acting, writing text for the theatre led me to poetry and to writing.

In 2005, I realized how much I missed publishing so founded Červená Barva Press. I have published writers from all over the world and met so many wonderful poets and fiction writers. I get excited when I publish writing that I love. All this motivates me to write. Reading many translations, which are easier to find now, stimulates me. There is nothing like a good book.

Bill, my partner, is an amazing artist and he listens to my new work all the time. It helps to read it out loud and hear it. I know by the sound and rhythm of it if it needs to be edited or not.

A few years ago, I started to write flash fiction. I wrote some very strange things which was fun. I am currently working on three more manuscripts called, “I Wish Francisco Franco Would Love Me (poetry),” “Screaming for Paul (a memoir of my teeny bopper years and all the bands I met),” and one that is untitled. I guess you could say the writing bug hit me at an early age.

You told me I was a light in
a dark world.
Hanging onto these words,
I continue.
Everyday, there is slaughter, murder,
horrific things, done to a body…
things that make me sick.

Day after day, death happens…
despite the sun coming out to
show the blue of the sky.
Beauty and ugliness in battle—
Light and dark in battle—
Each day, a tug of war and each day,
each side wins somewhere in the world.

You told me I was light in a dark world.
Why did you do this?
Do you know something I don’t?
Am I an angel alone weeping
with words coming out of my mouth
that no one listens to?

From Whiteness of Bone

Gloria Mindock is the founding editor of Cervena Barva Press and one of the USA editors for Levure Litteraire (France). She is the author of  Whiteness of Bone, (Glass Lyre Press, Publisher), LaPortile Raiului (translated into the Romanian by Flavia Cosma), Nothing Divine Here, and Blood Soaked Dresses.
Widely published in the USA and abroad, her poetry has been translated and published into the Romanian, Serbian, Croatian, Montenegrin, Bosnian, Spanish, Estonian, and French.

Buy at Amazon: Whiteness of Bone

3 thoughts on “JOURNEY TO PLANET WRITE: Music and Words Have Always Been a Part of My Life”